Skip to content
Check out our new antibacterial garments

Contemporary art takes over the city of Lisbon

ARCO is the contemporary international art fair of Madrid organized by IFEMA. It is considered to be one of the most important contemporary art events internationally which is celebrated each year in the Spain’s capital.Its aim is to reunite historical avant-garde to the latest emerging modern and contemporary art.ARCO Madrid was first held 36 years ago in 1982 and since has been one of the epicenters of art in Europe but also for Latin American art.

One of ARCO Madrid’s aim was to have a Brazilian presence to reinforce the influence of Latin American art. Their initiative was to create ARCO Lisboa in order to branch out to South America but to also to foster cultural artistic relations between Portugal and Spain.

This year, the event was held for the third time from the 17th to the 20th of May 2018. The unusual setting of the historical Fábrica Nacional da Cordoaria was narrow and organized in a way for natural light to fill the main area and highlight the art pieces just like frames. 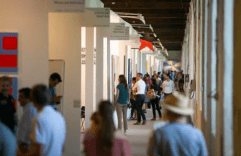 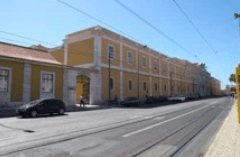 Since the start of ARCOlisboa, the event has been growing more successful each year. This particular year the art fair was brimming with curators, collectors, critics, gallerists, institution managers and artists. There were 30 galeries which were from countries such as Portugal and Spain but also the United States, the United Kingdom, Mexico and Italy.ARCO Lisboa aimed to integrate the contemporary theme of the event with the architecture of the host building. However, the fair could not only be seen in the Cordoaria. The lively Portuguese art scene could be felt throughout the entire city by international and local audiences by its vibrancy in the city’s history, architecture and light throughout the days of the art event.Another art fair which took place in Lisbon this year but for the first time is the emerging fair JustLX, with newly discovered galleries and artists. Just like ARCO Lisboa, Justlx is a contemporary art fair which surfaced from a Spanish fair: JUSTMAD.

It also takes place from 17th to the 20th of May. However, it was hosted in the Museu da Carris where it conveyed a memorable experience with its various spaces divided into different areas. They were shared amongst Portuguese, international artists, young galeries and individual projects by various artists. Within the majority of the galleries which Spain hosted, 5 of these were from Asturias, the region in which Semíramis González the director of JustLX, is originally from.

The curator/director was easily recognizable by her vibrant Arena Martinez kimono and she was also spotted at the Spanish fair of JustMad, where she also wore another model of the Spanish designer’s kimono.

The Art in Lisboa has started off well and has a bright future ahead, slowly introducing new art. But most of all it is giving a Portuguese and international experience of what is contemporary art in one of the most beautiful cities in Europe. 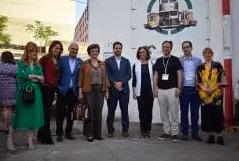