History and literature in cafes Many of them we have seen in movies, some of us we have read their stories in books and if we are lucky, perhaps we have visited some: today we bring you the 10 cafes in the world with the most history, passing through Buenos Aires, Madrid or Lisbon.

This cafe located in the Chiado neighborhood in the city of Lisbon, opened by Adriano Telles in 1905, –the same year that Pessoa returned from South Africa– continues to maintain its offerings to the rhythm of Portuguese fado: coffee and Belem cakes. Without a doubt, a must see on your next visit to Portugal. On the terrace there is a statue paying tribute to the writer, who used to be a regular at the place.

It dates from the year 1860, and is located in the city of Vienna. It was the meeting point of great intellectuals such as Sigmund Freud, Arthur Schnitzler, Peter Altenberg or Leon Trotski. A true breeding ground for great writers. Almost a century after the golden age of cafes, UNESCO declared them as cultural heritage of humanity.

As a curious fact, it is said that this cafe was popularly known as the Chess University, since many fans of this game used to come to the place and enjoy games in the checkerboard.

If we talk about Italian cafes, the city of channels tops the list with some of the best. Thanks to its position and its commercial relations, a coffee tradition was born in Venice as early as 1700, with top quality products and totally exotic flavors for the time.

Café Florian is one of the emblems of the city and still has its doors open. It was inaugurated in 1720 with the name of Alla Venezia Triunfante, with a clientele ranging from nobles, politicians and intellectuals to the occasional Don Juan. It has several rooms decorated in different styles – one of the most famous is the China room. Today, it not only works as a café, but you can also see exhibitions, installations and all kinds of references to contemporary culture.

Located very close to the National Library, this café was born in 1888 in Madrid, founded by Gumersindo Gómez, who in honor of his land decides to open the premises. Like all popular cafés in big cities, Gijón was the meeting place for the meeting of the intellectuals of the moment. From Valle-Inclán to Truman Capote, who was received by a group of writers or Ava Gardner, who lived for a time in Madrid.

In 1986, Sara Montiel dedicated a song to coffee called “Café Gijón” on her album Purísima Sara. If you want to read first-hand how the life of the site was, we recommend Crónica del Café Gijón, written in 1955 by Mariano Gómez Santos, although the book has not been well received by regulars and since then, the writer stopped frequenting it.

It is the oldest coffee in Rome and the second in all of Italy, surpassed by the Florian. This café that has more than 300 years of experience in the world of intellectuals, still retains its bohemian aura today, being the refuge of many writers, artists and thinkers today.

World history figures such as Goethe, Keats and Stendhal have passed by their tables with fervent talks about poetry, literature and art.

Opened more than 100 years ago, this café located in Zürich is one of the oldest in the city, becoming a benchmark for culture, art and literature. Its first customers, amazed not only by its art nouveau aesthetics, were immersed in the avant-garde through the basement patisserie and the pool tables on the first floor. Coffee was the protagonist of great discussions on Dadaism orchestrated by Hugo Ball and Tristan Tzara. However, it was not only these world-famous characters who were the only ones passing through there. Scientists from all over the world passed by, even Albert Einstein has lectured to his students in one of the rooms of the famous café.

This cafe located in the bohemian neighborhood of San Telmo in Buenos Aires, is one of the youngest on our list, it was born in 1982 by the hand of the poet Ruben Derlis, coinciding with the return of democracy and forming part of the cultural heritage of the city. 6 years after its opening, in 1988, the café closed but reopened its doors just over 10 years ago, in 2009. This place is known for being the meeting point for lovers of good literature. In this same café, Astor Piazolla met his wife Lucía Micheli, this encounter being immortalized through the song Lulú.

Another of the cafes that make Vienna a refuge for memories and anecdotes as diverse as they are famous. This café, founded in 1899, was initially criticized for its art nouveau decoration.

Among its regulars we can find great modernism characters such as Egon Schiele, Oskar Kokoschka and Gustav Klimt. It was also the favorite café of the architects Otto Wagner and Adolf Loos, the latter was in charge of its decoration. Writers of the stature of Joseph Roth, Karl Klaus and Elias Canetti and composers such as Alan Berg and Oscar Strauss were clients of the place.

Located in District 6 of the city of lights, it is the oldest in the city, it was founded in the year 1686. We owe its fame to the Comédie Française, since when settling down a few steps from the café, it attracted all its clientele, and with it, success. Among its diners, we can find Voltaire and Rousseau. Benjamin Franklin is said to have conceived the United States Constitution there. It was the headquarters of the Cordelieres Club, who advocated universal voting and the elimination of the monarchy. Without a doubt, a place with history within Paris.

Franz Kafka chose this place for his works, in the heart of Malá Strana, one of the oldest neighborhoods in Prague, next to the Vltava river and the National Theater, with wonderful views, its functionalist decoration and its waiters dressed in tails almost go unnoticed. , respecting the old tradition.

It was founded in 1884 and actors and playwrights are often seen over there having a drink after the performance. This café is a clear reflection of the hectic history of the city, its excessive intellectual life and the Czech way of life. 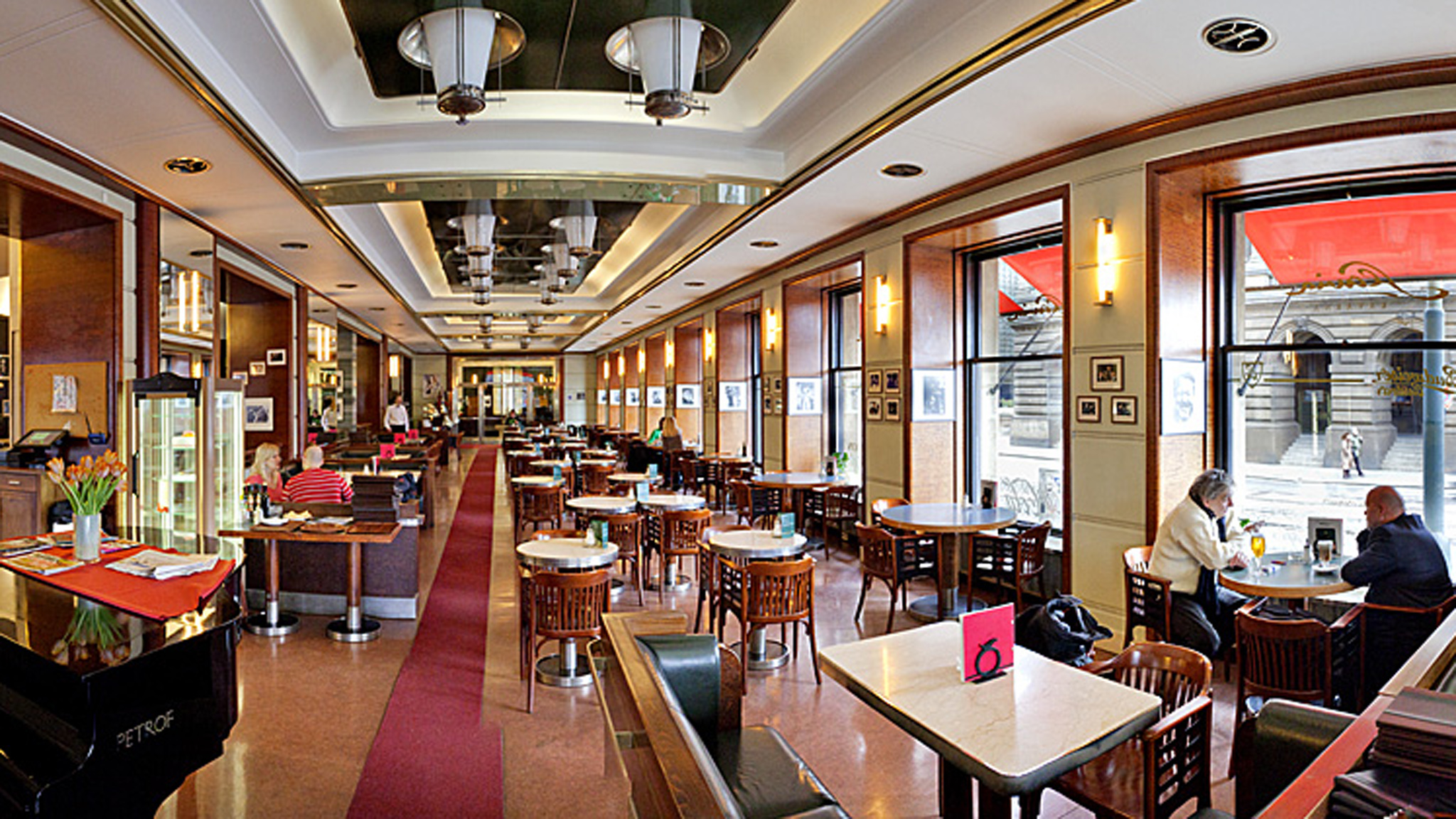